About I’m a Scientist

I’m a Scientist is like school science lessons meet the X Factor! School students choose which scientist gets a prize of £500 to communicate their work.

Scientists and students talk on this website. They both break down barriers, have fun and learn. But only the students get to vote.

This is the Tin Zone. It has a range of scientists studying all different topics. Who gets the prize? YOU decide! 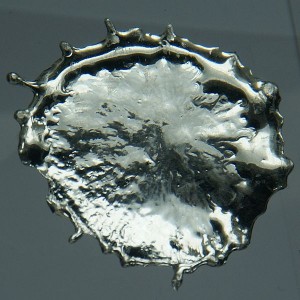 A blob of tin! Image by Jurii for Wikimedia

Tin can be mixed with copper to make bronze, or with copper, antimony and lead to make pewter. At low temperatures it turns from white to gray, and becomes a ‘superconductor’, meaning it has no resistance to heat or electricity passing through it.

Tin doesn’t rust or corrode, so it’s often used to coat other metals to prevent them from corroding.

It’s thought that tin was first mined in South East England, and that it was used in bronze items as early as 3,500 BC.

About 35 countries in the world mine tin to coat steel cans, and to make tin roofs, signs, tiles, tin soldiers and whistles, among other things.

Would I'm a Scientist be great at your school?

And make sure you support us on Twitter, so we can say hi, and keep you up dated on what's going on.